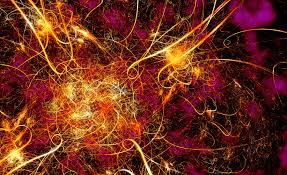 The search for truth haunted him during sleeps,
Life struggled to hang on between hopes and dreams,
A plate of ideas never presented itself,
Time gradually left spots of grey in his hairs,
It left him bewildered, and his thoughts scattered
While his cat screeched for air inside the box.

Ideas are contagious, obsessions are grave,
He was caught unaware between the extremes,
Answers clawed into his weary brains,
And filled each cell with a resurgence of life.
Poison spread evenly inside the box,
The screeches of dislike slowly ceased.

His tangled life began to relieve, he felt the Sun
Shower him with vibrant quarks of love, his dark
Lab was left with the fire and light of a distant source,
The granter of verve pushed his brains to the limits,
With each ray, he felt the unpredictability of life,
He felt its supreme beauty, the cat was forgotten.

His theory received its tranquil intro, but each
Word build itself up towards a poignant revolution,
Quarks of love was replaced by the fury of science,
Erratic methods of nature became inevitable truths,
The grandeur of the world was replaced by
The sophistication of a particle in motion,
The poisoned cat hopped between life and death,
And played merrily with the tangled strings of science.

Notes
Verschränkung is the German word for Entanglement, coined famously by Erwin Schrodinger as he went on to interpret the phenomenon of Quantum Mechanics through the famous Schrondinger's Cat Thought Experiment. Basically, the experiment features a cat, a flask of poison, and a radioactive source, placed in a sealed box. If an internal monitor detects radioactivity (i.e. a single atom decaying), the flask is shattered, releasing the poison that kills the cat. The Copenhagen interpretation of quantum mechanics implies that after a while, the cat is simultaneously alive and dead.! Yet, when one looks in the box, he finds the cat alive or dead. The thought experiment was brought forth to challenge the Copenhagen interpretation. I tried to mix these ideas with the life of the scientist and the intrinsic unpredictability of his science and his life. He is left in Verschränkung in-front of science and yet he finds a way to untangle them. To know more about the Schrodinger's Cat experiment, visit : Schrondinger's Cat Thought Experiment
Posted by Anand S Unni at 09:06

FROM BETTER TO VERSE

An Anthology of my Poems which got published. Click on the image to purchase.

"Basically, at the very bottom of life, which seduces us all, there is only absurdity, and more absurdity. And maybe that's what gives us our joy for living, because the only thing that can defeat absurdity is lucidity."
- Albert Camus

BE A PART OF MY BLOG

CATCH THE POSTS FROM YOUR MAIL