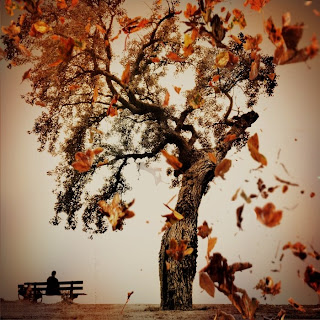 The calm of morphine kept fading,

By little I found the pain brewing,
While the untamed heart kept pounding
Much like a blanched pigeon
Freshly caged.

Days were lost in hours of pain,
Weeks passed as I couched
Sans the strength to speak out,
I gave a whisper one day
As lightly as a fading song,
I asked the doctors about her health.

Spells of hallucination always struck,
I remained in a hospital bed
Looking at the monitor echoing my beats,
But a moment after, I am in a car,
Racing at knots at the rage of opium.

In a moment my life became white,
Her hands were clutched onto mine,
I looked into her eyes and a paranoia rose,
Is it the morphine that flows through me,
Or is it the opium that makes me high?

The doctors claimed she had died,
But then who sat beside me last night?
Drops of tears concerned my vision
I felt her as real as the flagitious doctors
Who raced around me like wild hyenas.

A white veil separated me from life,
The car drifted on wildly,
My veins were clogging with opium,
I stared blankly at her eyes
Which appeared cold in fright,
I loved her, I assumed she knew,
I would have said it too,
But the screech of breaks
Blocked my speech.

I woke up once again,
I never felt motion,
Nurses rushed to pick my state,
In a touch of visible distaste,
I asked again about her health.

They spent a few seconds in tumult,
And assured she is safe and great,
I breathed, I saw light,
I saw her hands reaching out for mine,
I saw the monitor going blank.
Posted by Anand S Unni at 02:49

FROM BETTER TO VERSE

An Anthology of my Poems which got published. Click on the image to purchase.

"Basically, at the very bottom of life, which seduces us all, there is only absurdity, and more absurdity. And maybe that's what gives us our joy for living, because the only thing that can defeat absurdity is lucidity."
- Albert Camus

BE A PART OF MY BLOG

CATCH THE POSTS FROM YOUR MAIL